Hello all and welcome to the first installment of my Steampunk series! I’ll be going step by step of how I created my Halloween costume starting with the most complicated piece: the eye piece.

It started with an empty pill bottle. I tore off the labels so that I was left with the just the translucent orange bottle. It’s a regular, prescription sized bottle that I am sure many of you at home will have lying around somewhere.

The next thing I did was use Crayola Air-Dry clay to do the mold. In retrospect, I should have used a stronger clay, as the air-dry one was very brittle when it dried, but  in the end it worked for my purposes. I went with it because of how light it was, as I knew that the weight would make a difference when it came to applying the prosthetic to my face.

Afterwards, I sanded it down to make it smooth and flat on all sides and to clean up any of the dust left over during the drying process. As you can see, as it dried the clay actually cracked on the bottom. Oddly enough, it still held onto the bottle, unlike the top piece which I reinforced with craft glue. I actually ended up having an issue with Play-Doh the parrot where he bit off part of the top, but I was able to work around it and piece it back together. The clay was really easy to sand, so I had to be careful not to overdo it and shrink the size of the piece. I wanted to make a big impression with it and for that I needed it to be the size that I made it.

After sanding it, I gave my eyepiece its initial paint job. I went with copper and gold colors with a silver accent in the center of the eye. I also used black to accentuate the crack in the clay. When things go wrong, sometimes they can work to your advantage and this was a great case of that happening. 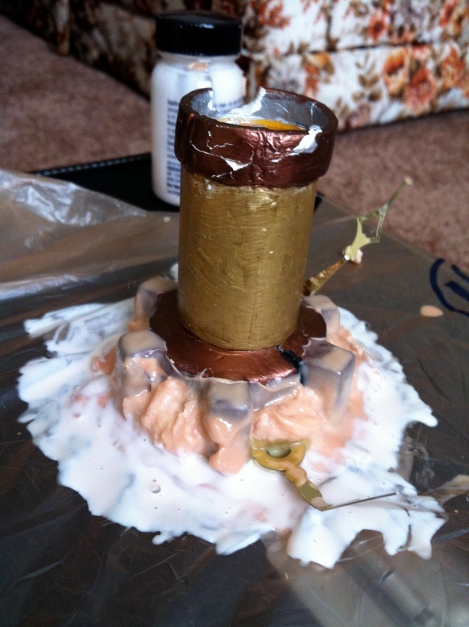 After the paint dried, I began adding liquid latex to the piece. I used small pieces of cotton in between the gear spokes to make it look like there was skin and muscle protruding around the gear. I also added a couple of golden clock hands which I submerged into the latex. In this photo you can actually see where Play-Doh bit the clay and cracked the top piece. Later, I find a way to make it work by adding a flat gear to the top, which actually made it look like it could be part of a gas mask. 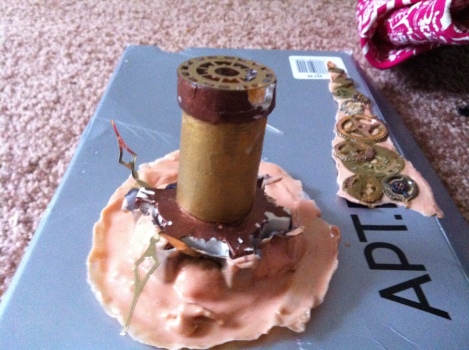 I had to make sure that I applied the latex on a flat surface that it wouldn’t stick to, so I alternated between an upside down metal trashcan and the lid to an old shoebox. After the latex dried around the gear, I peeled it back to make it look as though it burst out of the latex.

Paint job #2! After the latex dried, I painted it with black and red acrylic paint. I also touched up the eye piece paint and added a flat gear that I got from Costume Holiday House to the top. I spatter painted red on the eye piece itself to help complete the illusion that it had burst out of the eye not too long ago.

And that’s how I did it! It ended up looking really cool though it took A LOT of spirit gum to keep on my face. Next blog, I’ll show you some of the accessories that I made to go with the costume and then a chest prosthetic that I made which features a working clock that lights up. Until then!

“To some, ‘steampunk’ is a catchall term, a concept in search of a visual identity. To me, it’s essentially the intersection of technology and romance. –  Jake von Slatt